Taking the shock out of tyre wear – Trailer Magazine Article

GETTING THE MOST OUT OF A SET OF TYRES COMES DOWN TO HAVING A GOOD MAINTENANCE REGIME, WHICH POWERDOWN AUSTRALIA SAYS SHOULD ALWAYS INCLUDE REGULARLY CHECKING THE SHOCK ABSORBERS. 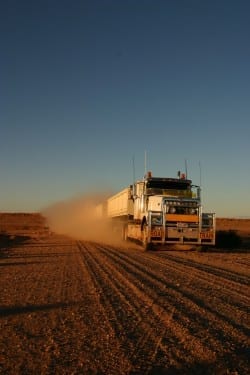 Feeling the effects of a rough economy, fleet managers are always looking for ways to reduce maintenance costs, says Powerdown General Manager, Mathew Gatgens, adding one of the biggest costs they face, after fuel, is from tyres. Although checking pressures, regular rotation and alignment are all standard items on a modern tyre maintenance checklist, Mat says that checking shock absorbers should also be added to the list. “As an important component to the axle and suspension set up, it may seem unusual to suggest that shock absorbers should be part of a tyre maintenance program, as well as a suspension check. But the truth is that shock absorbers fulfil an essential role in getting the best cost per km ratio out of tyres,” explains Mathew.

“Getting back to the basics, the main role of the shock absorber is to control the oscillation of the vehicle’s spring, whether it is a multi-leaf, parabolic or air spring. By controlling the movement of the spring, the shock keeps the vehicle’s tyres in contact with the road surface, which has an overall effect on braking, handling and stability.” Worn out shock absorbers or units that are not designed for harsh Australian roads will allow a tyre to bounce on the road surface in an uncontrolled manner, Mathew adds, which can result in flat patches or “scalloping” on the tread surface of the tyre. “This inconsistent type of tyre wear happens due to the tread scuffing the road surface at high speeds, however aconsistent wear pattern could be the result of an alignment issue or a worn suspension bush,” he says. 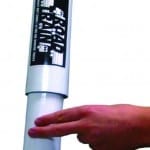 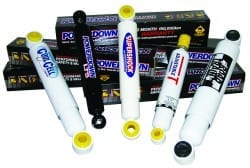 “With the introduction of new innovations such as the Low Pressure Gas technology trailer shock absorbers, Powerdown can offer a suspension solution to any unique operating condition.”

The main point is that a working shock absorber should be dissipating heat, but try to get to them as soon as you stop, as they will cool down fast.” If the shock absorber is stone cold, Mat says there is a good chance that it needs further inspection and likely replacement. When replacing worn out shock absorbers, Mathew recommends installing components that have been designed for Australia’s harsh operating environment and conditions. “For more than 30 years, Powerdown has designed and developed the largest selection of commercial vehicle shock absorbers in Australia, which have proven themselves over millions of kms,” says Mathew. “With the introduction of new innovations such as the Low Pressure Gas technology trailer shock absorbers, Powerdown can offer a suspension solution to any unique operating condition that will help get the most out of tyre wear.”